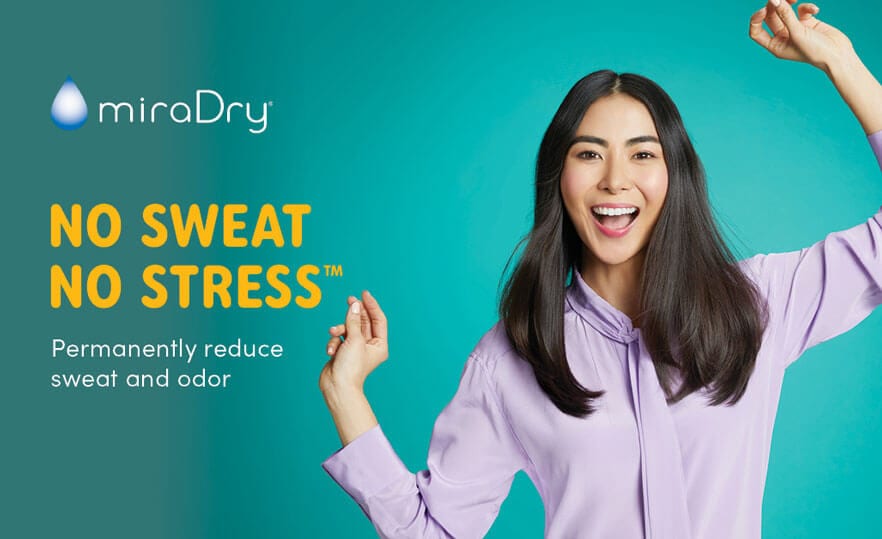 How Safe is miraDry Sweating Treatment?

miraDry is a revolutionary treatment which permanently eliminates underarm sweating.

It was initially designed as a treatment for the treatment of hyperhidrosis (excessive sweating). However, miraDry is quickly gaining popularity among a growing portion of the population that is questioning why any 21st-century guy or gal should have to put up with underarm odour.

And that’s a significant portion: miradry is now used in more than 50 countries, with more than 140,000 successful treatments carried out at the time of publication.

The treatment works by delivering low doses of heat (microwave) energy to kill sweat glands under the armpit.

To the uninitiated, the treatment may sound like a drastic measure. So is it safe?

In this article find out how some of the world’s leading health regulators have answered this question (spoiler – with a resounding YES).

We’ll also explore some of the facts, so you needn’t sweat when it comes to taking an informed and balanced view.

Is it Safe to Stop Underarm Sweat?

Sweating is one of the body’s necessary evils. Without it, our bodies would quickly overheat and succumb to potentially lethal heatstroke.

If you’re considering miraDry, you’ve probably wondered if inhibiting one of the body’s crucial regulatory functions is wise.

The great news is underarm sweat glands account for only a tiny fraction (2%) of the body’s 2 million sweat glands overall.

So, while the miraDry leaves the underarms sweat-free, perspiration across the rest of the body is unaffected and the procedure is shown to have no effect on our ability to thermoregulate.

The same studies also show that miraDry doesn’t cause any compensatory sweating elsewhere on the body.

How does it work?

Okay, so we’ve already learned that putting a stop to a tiny portion of the body’s ability to sweat is perfectly healthy.

What about all those lurid tabloid headlines reporting women ‘heating’ their armpits in the quest to get sweat-free?

This is thanks to the unique way in which the energy heats molecules, essentially by exciting – or rotating – them.

The water and fat under the arms each react differently to miraDry’s energy. Water-rich sweat glands absorb the highest proportion of heat, while the more fatty subcutaneous layers absorb relatively little.

That’s why miraDry is sometimes referred to as a ‘selective’ heating process.

In 2021, miraDry celebrates its tenth anniversary as an FDA-approved treatment.

The FDA (Food and Drug Agency) is the US body responsible for approval and regulation of new medical treatments. The agency initially approved miraDry as a treatment for hyperhidrosis in 2011. Approval for use against general sweating on skin of all tones followed in 2015.

The approval process included a blinded clinical study of 120 patients over a year. Dr Michael S. Kaminer, a board-certified dermatologist, Assistant Clinical Professor of Dermatology at Yale University Medical School and co-director of SkinCare Physicians in Boston said of the study: “We saw compelling efficacy and safety data with the miraDry procedure…This data, combined with the histology data on miraDry patients, is convincing.”

In 2014, miraDry was also approved in Europe, when the treatment achieved Conformite Europeenne (EC) status.

Medically-speaking, miraDry is a non-invasive treatment, which means no surgery needed. As medical procedures go, it’s relatively comfortable. But there are short-term side effects you should be aware of.

The most common include underarm swelling, numbness, redness and soreness, generally lasting a few days. But in the worst case, side-effects can last for a few weeks.

A study by Dermatologic Surgery found that around two in 31 patients decided to opt-out of their second treatment because of the discomfort they experienced the first time around. Among these is journalist Samantha Netkin, who reviewed miraDry for Cosmopolitan magazine in 2018.

Samantha said: “Although a second miraDry treatment could deliver optimal results, I’ve decided not to get it – I just don’t want to go through the discomfort again. That said, my advice to anyone considering MiraDry is that it’s definitely worth it.”

Here’s our advice: Periodically applying ice packs to the underarm for a day or two after treatment is one of the best ways to manage discomfort.

Over-the-counter pain medication (following your doctor’s advice) can help too, and it’s best to avoid exercise and heavy lifting for at least a week after treatment.

As uncomfortable as any potential side-effects may be, they are short-lived and not damaging to overall wellbeing.

Long-term side effects are extremely rare. Long-lasting but non-permanent nerve damage is one of the most serious and patients with lower body mass are generally at higher risk because their nerves are closer to the skin’s surface.

A new treatment protocol introduced in 2015 has effectively reduced the chance of nerve damage to negligible.

As a precaution, miraDry isn’t recommended if you are pregnant or breastfeeding.

You should also avoid it if you have an infection, or if you have significant scarring, keloid scarring or radiation injuries around the area to be treated.

Cysts and hidradenitis suppurativa (acne inversa) are another potentially preventative conditions. To be safe, you should avoid miraDry if wearing a pacemaker or other electronic implant.

You may also need to avoid treatment if you take certain medications like Accutane (isotretinoin), or if you have taken the drug in the past six months.

As always, consult your doctor and miraDry professional if you have concerns about any of these conditions.

For more information, or to explore miraDry at Define Clinic, get in touch to book your free consultation.